One Mission Buzz Off is a truly inspirational organization that I have volunteered for now for years.  Photographing fabulous children’s gala in Boston at the Four Seasons to raise funds for these kids to the Buzz Off’s in Boston where this organization was born.  Now, as I live in Dallas Texas – I have the pleasure of continuing my support with OneMission.org as this great Buzz Off is now going national.  This year the 2016 Buzz Off was held at the Globe Life Ballpark in Arlington Texas.  The outcome was wonderful and we had such beautiful support from so many individuals and families.

One Mission.org Pediatric Cancer Buzz Off supported by Ivan Rodriguez #7 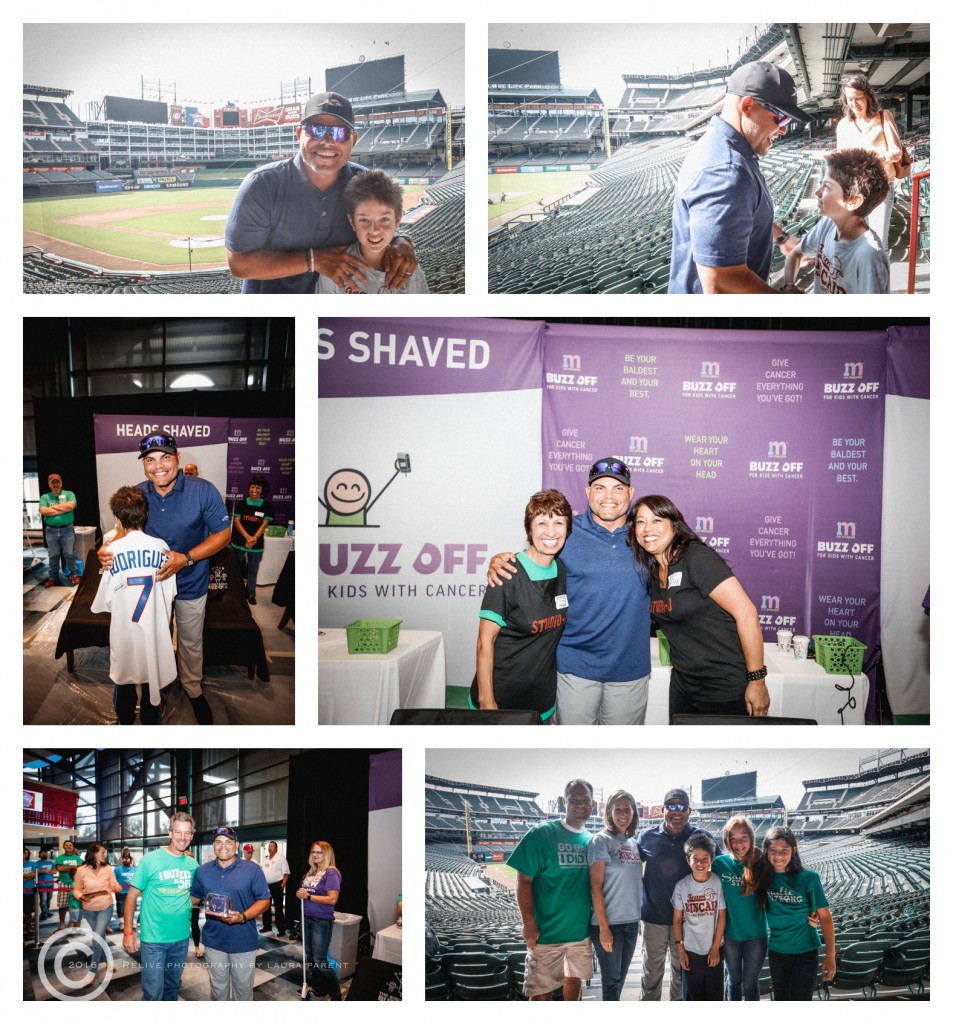 The very gracious Iván Rodríguez Torres nicknamed Pudge or I-Rod is a retired Major League Baseball catcher. In his career, he played for theTexas Rangers (on two different tours, comprising the majority of his career), Florida Marlins, Detroit Tigers, New York Yankees, Houston Astros and Washington Nationals.)  joined us in support of the children and gave some of the children and families signed memorabilia.  He was so sweet with the kids and had a great way of making them smile.  That is so important for the kids and their families to be supported by so many wonderful people.

Donnie Lamont Sadler (born June 17, 1975 in Clifton, Texas, United States) is a former right-handed Major League Baseball utility player. An alumnus of Valley Mills High School in Valley Mills, Texas (where he was an all-state shortstop), Sadler is small in stature, standing at only 5’6″ tall and weighing 175 pounds. His cousin, Ray Sadler, is an outfielder in the Tampa Bay Rays organization.) joined us and then so did Alumni Michael Anthony Munoz (born July 12, 1965 in Baldwin Park, California), is a retired professional baseball player who pitched in the Major Leagues from 1989 to 2000.  These guys were a blast, shaving the kids heads, getting their hair shaved and signing the shavers shirts  and taking photographs with everyone.  I Love to see the dedication of the volunteers every year and the turnout of support that follows.  Here are some pictures to enjoy of the Buzz Off.  Please share and comment so that more people can learn about One Mission and the Buzz Off.

One Mission is a pediatric cancer foundation that does whatever it takes to get kids through cancer.

We just do it in a different way. Rather than fund long-term solutions like research, One Mission’s programs and services provide immediate relief from the relentless wrath cancer unleashes every single day.  Programs and services that lift the spirits of patients and their families, help the healing and recovery process and make life more livable during treatment and hospitalization.

Want to join the discussion?
Feel free to contribute!